‘To give kind heed to dead men’ is one of the Charges of the Odinic Rite as of other religious traditions. Jeremy Taylor stresses the need for proper disposal of the dead in his ‘Rules of Holy Dying'(1651):

‘When thou wept awhile, compose the body to burial: which that being done gravely, decently and charitably, we have the example of all ages of the world to warrant so that it is against common honesty and public reputation and fame not to do this office. Let it be interred after the manner of the country and the laws of the place, and the dignity of the person.’

In the Elder Days Odinists practised both earth burial and burning. The body of a high-ranking warrior often received special treatment. It was laid in a cairn with goods and arms and sometimes even a charger. The body was placed in a sitting posture, usually in a chamber formed of baulks of timber or blocks of stone, over which was piled earth or gravel. But the ceremonial disposal of the dead for which the old Odinists are most often remembered is what we know as ship-burial.

It is likely that the earliest form of this symbolic funeral was in fact the sending of the body to sea in the direction of the setting sun, on the deck of a blazing funeral ship. The symbolism is clear. The popular superstition encouraged by Christian writers, that the east-west orientation in burial has something to do with the hope of bodily resurrection is a late accretion, a somewhat feeble excuse for continuing into the Christian era an ancient pagan tradition. East-west burials were known to the worshippers of Odin long before the arrival in Europe of Christianity and the practice was widespread among the ancient North European peoples. 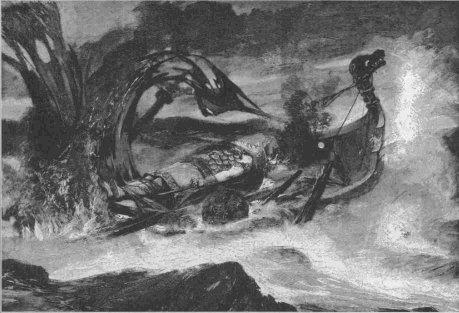 The explanation, still very much a living idea, is of the equation of sunrise and sunset with life and death, symbolised by the sun’s descent into the unknown and its daily rebirth. In this way the west became associated with death and cold and decay, the east with life and warmth and rebirth.

The popular saying that someone or something has ‘gone west’ may well be connected with this ancient belief. The suggestion of F T Nettlingham, editor of ‘Tommy’s Tunes’ 1917, that ‘gone west’ is ‘a war expression meaning lost destroyed or killed because the enemy fires at our troops from East to West’, can be disregarded. Nevertheless I sometimes wonder myself whether the familiar Hollywood picture of the cowboy hero disappearing into the sunset does not itself derive from some unconscious urge rather than a desire for photographic effect. The Odinist explanation for the symbolism connected with ship burial at sea is shared with many other pagan traditions. The disposal of the body of the Celtic King Arthur will most readily come to mind.

Procopius, in a notable passage, described the island of Britain before the Anglo-Saxon tribes introduced Odinism as ‘the land of the dead’. He describes how on the opposite coast, in Frankish territory, lived the seamen who, without ever seeing their passengers, ferry the dead across the Channel. Setting out with their heavily-loaded boats at midnight they reached Britain within the hour. There the souls were called out by name and the ferrymen went back home with empty boats. The fifth century CE historian Claudian also tells us that facing the coast of Britain ‘there is a spot where Gaul stretches out it’s furthermost shore opposite the wastes of the ocean where they say that Ullixes with a libation of blood stirred up the silent folk. There the mourning plaint, of shades flitting about with a gentle whir is heard. The natives see-the pallid forms and the figures of the dead depart’.

Ship burial is mentioned by poets and has been substantiated by many famous archaeological finds as a practice of our princely ancestors. Such burials seem to have been fairly common for chieftains and other men of importance. The Sutton Hoo ship burial in East Anglia, with its magnificent hoard of treasure, is the most celebrated example yet to be excavated by archaeologists. Most ship burials that have been uncovered so far are of the eighth or ninth centuries CE. The pattern was similar for all: a burial-chamber to contain the corpse with the ship’s mast severed at the height of the chamber roof. The body, dressed in fine clothes, was placed on a bed. The ship itself was provided with all the equipment that would be needed on a long journey: utensils such as kettles, plates, cups, barrels and candlesticks, perhaps a chess set. Horses and dogs were slaughtered and interred with the ship and there might also be, if there was room, small boats and a sled. Sometimes a peacock (symbol of immortality) was included. It is interesting to see illustrated in this way the Odinist belief that animals as well as men share the future life.

The burial-chamber was always athwart the vessel. There is still a strong superstition amongst sailors that if a body is carried at sea it must never lie in the direction of the ship’s progress because it is considered undesirable that the spirits of the dead should be thus encouraged to continue along the same path as the living crew-members.

It is fitting that the Odinic Rite has adapted and adopted a ceremony appropriate to the modern age, which incorporates many of the traditions of our ancient faith.

Preservation and Destruction in the Vale of the White Horse

This website uses cookies to improve your experience while you navigate through the website. Out of these, the cookies that are categorized as necessary are stored on your browser as they are essential for the working of basic functionalities of the website. We also use third-party cookies that help us analyze and understand how you use this website. These cookies will be stored in your browser only with your consent. You also have the option to opt-out of these cookies. But opting out of some of these cookies may affect your browsing experience.
Necessary Always Enabled

Any cookies that may not be particularly necessary for the website to function and is used specifically to collect user personal data via analytics, ads, other embedded contents are termed as non-necessary cookies. It is mandatory to procure user consent prior to running these cookies on your website.