On the 26 July 2004 we received an email from a member of the public who is a resident in the White Horse Stone area. She informed us of a planning application by the telecommunications company ORANGE to erect a 15 metre mast/tower within yards of the White Horse Stone.

Local legend says that following the Battle of Aylesford, the body of Horsa was laid upon the stone or alternatively buried beneath the stone. There is no evidence for either, as is often the case with folklore but the stone has, for many, become the symbolic “Birthplace of England” and inextricably linked with those who bought our faith to the land that would become England.

Of course, as soon as we received this information we requested further details and were able to confirm that this was in fact true. This page will detail all information available and keep you informed of progress.

There has been an excellent response to the emails we sent out. People from all over the world have contacted Tonbridge and Malling council or have promised to do so.

All those who wrote to protest were today sent a letter by T&M Council inviting anyone who wishes to speak to the planning committee to contact them and make this known. Hengest has replied asking to speak on behalf of the OR.

The Big Day! Today Hengest paid a visit to the White Horse Stone where he carried out a protection ritual and call on the High Ones to be with him. After spending quite some time taking in the wonderful ambience he made his way to the Tonbridge and Malling Council offices. Before going in he introduced himself to 3 members of Wodens Folk who had come to protest.Each person who had registered their intention to speak was allocated three minutes to say their piece. Hengest was the first person to speak and he said the following:

I am here today as a representative of the Odinic Rite, an international organisation for those who practice the pre-Christian faith of Northern Europe, known to us today as Odinism. We fully support the position of English Heritage with regard to archaeological concerns and would like to add our own objections as follows: 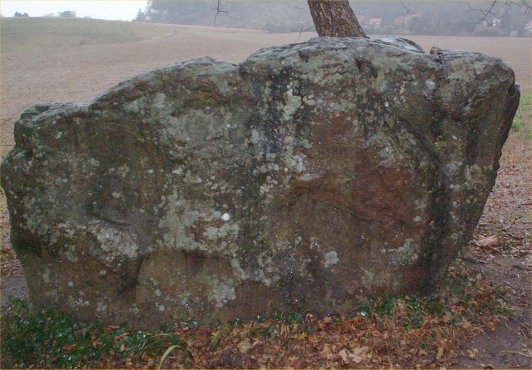 Next to speak was Lee from Woden’s Folk who gave a far more militant talk, threatening civil disobedience and legal action. Third was a well spoken elderly gentleman who pointed out that under the law for Areas of Outstnding Natural Beauty, the benefits of any work must outweigh the damage caused. The fact that this mast would provide 15 extra seconds of air time to people on the Channel Tunnel Rail Link was not acceptable.

After all had spoken the Councillors got to make their points and this is where something unexpected happened. The first councillor said that he was fascinated by the objections read by Lee and Hengest. The second said he just wanted to agree with everything “the Odinists” had said and a third suggested that in future, groups such as ours should be consulted on all works affecting ancient monuments. All were in agreement that the application showed a complete disregard for the status of the area. There was also condemnation for the Area of Outstanding Natural Beauty Unit which was set up to protect the area and yet failed to even respond to the consultation and sent nobody to the planning meeting.

Having heard from all parties the committee then voted on the application which was unanimously rejected. A great result and whilst it is debatable whether the application would have been rejected without our intervention, one thing that is indisputable is that our involvement has made sure that the White Horse Stone is now recognised as a holy site of great importance.

Preparing for a new growing season

Fylfot Hearth of the Odinic Rite at Yule

Odinism & The Environment - What Can Be Done?

Laundry and the butterfly: a study into the harm done by conventional detergents
0 replies