And so it was, is and will be! The Wyrd was first; the cosmic mind that drives the wheel of fate and mysteriously hides a changing pattern of unfolding evolutionary destiny. The rune Perthro is a dice-cup, the container that throws the dice in the game of life of which we, the gods, elves and all beings participate. It is the opening womb of the Earth Mother, giver of life, and at the time of birth we begin to work out our fate. Behind the ‘ chance ‘ of the dice throw is a pattern of evolution of which we form a part. We are woven by the Wyrd Sisters into the loom of fate, on to the Web of Wyrd, in a pattern with all the other beings of existence and our own destiny appears upon the pattern. And what we do will affect what we are in the future: the past determines the future.

Interestingly, the Norse Orlog is very similar to a Flemish (Dutch) word ‘ oorlog ‘ which means ‘war’. The word war appears to derive from an Aryan root-word having the following meanings:

‘To choose’ reminds us of the Valkyries, Choosers of the Slain, an aspect of the Wyrd Sisters. ‘To speak’ implies ‘the Word’. ‘To wind/turn’ implies the cyclic motion of the cosmos and ‘wind’ can be applied to a spring/spiral. Is the cosmos not a constant ‘war’ of opposites, the eagle battling with the serpent on the World Tree? And are we not a part of this constant war? And from this struggle emerges the evolutionary drive of the Wyrd , the cosmic mind. 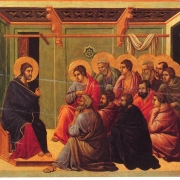 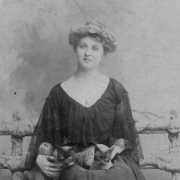 You, Our Father Odin - Renée Vivien

The Christian Doctrine of the Incarnation - An Odinist view

Wyrd Part 1: The suppression of Wyrd