On a small mound, some yards from Cottington Road in the Cliffsend area of Thanet, Kent, stands a stone monument known as St. Augustine’s Cross. The ‘Celtic Style’ cross bears an inscription which des­cribes the landing of this alien monk at nearby Richborough, where he “—on this spot met Ethelbert and preached his first sermon to our countrymen. A.D. 596”. It further states that the monument was erected by George Levenson Gower, 2nd Earl of Granville, in 1884 C.E. “So that events are remembered among the English.” We will probably remember the ‘events’ as a woeful day for our folk.

This may or may not be the actual site of the fateful meeting, but legend tells that Ethelbert, probably influenced by his Christianised wife, Bertha, agreed to meet Augustine, but stipulated an open-air meeting to reduce the opportunities for necromancy. It is tolerably certain that he would have selected a site of special significance, as courtesy, honour and protocol would have dictated. Old folklore reveals that this site was of great importance long before the alien monk’s arrival. Here is an intersection of the lines of power – lay lines – marked, so the tales tell us, by a ‘moving’ stone. Such stones are said to return mysteriously over­night to ‘their’ site, no matter where they may have been moved.

On several visits to the site members of my family and I have all felt a tingling on the soles of our feet whilst walking round this site and on one occasion clearly detected two palm-sized warm spots at two of the ‘intersections’ despite the fact that the area was in the shade, and the grass around cool. The site appears to have an invigorating effect on one’s energies.

What became of the original stone none can say, but its importance has been preserved by folklore.

Local ‘esoteric’ circles use the site as a visualisation centre for meditation, and attempt to channel healing energy from it.

The nearby road and dwellings may limit its appeal as a site for large Blots. However, considering it as the spot where 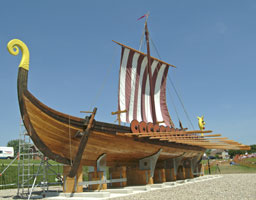 Augustine is said to have begun his work of bringing his desert creed to our land it seemed fitting to re-­hallow and re-dedicate this place to our native holy faith, which I did with a short Blot of reclamation to Odinism.

Thanet has many sites of great importance to our faith and folk. About 3/4 mile from the cross stands a full-scale replica of ‘The Hugin’, the ship said to have brought our great kings Hengest and Horsa to these islands. Legend states they landed at Pegwell Bay or Ebbsfleet, and the replica ship stands on the side of the coastal road.

If you are in this area a visit to these sites should prove of interest. Perhaps this restoration of a holy site will help in our task of revitalising our folk.

For Faith, Folk and Family