You are here: Home / Latest Articles / Poetry & Prose / Traces of Germanic Deities in the “God” of Beowulf

In examining references to the Christian god in Beowulf, we can discern the presence of pre-Christian Germanic deities. Many academics today minimize the etymology of certain terms found in Beowulf and many translators use their poetic license to dilute the Heathen meanings of these same terms. Yet we can see in many ways the presence of Wyrd, the Norns, and sacral kingship in Beowulf. These implied uses of pre-Christian deities reinforce the idea that the church had not “won” in England in the early middle ages and still had to compromise with the Odinic spirit of the Anglo-Saxons.

We must remember that the version of Beowulf to which we have access was written during a period of “dual faith” in England. Recorded in West Saxon in what is now called the Cotton Vitellius A. xv manuscript, the Beowulf story we have dates to some time between 521 and 1026 CE (http://www.heorot.dk/beowulf-vorwort.html). During this period, the church still needed to assimilate with the indigenous cultures existing in this area because they found they could not dominate by brute force alone.

Documentation in other manuscripts indicates that Heathen practices continued during this window of time in England. One notable example is the practice of King Raedwald, who “set up altars to Christ and to the devil side by side” after his conversion to Christianity and before his death circa 625 CE (Mitchell 1995). It is a further digression, but important to note, that charms referring to Gods such as Woden and Erce were recorded by monks during this same period.
“God” is itself Germanic as well. No terms for the Christian God found in Beowulf originate from Latin. They are actually all Germanic in origin. The term “god” is perhaps the greatest example of this, since it was most likely originally a term for any god or goddess rather than one in particular, as found in the Old English “god” and the Old High German “got.” Beyond this, the term “god” maybe derived from the Gothic root “gheu” meaning “to sacrifice to.” As Roman Christians moved among Germanic peoples, they used the term “god” for a single deity.

Another term referring to the Christian god that is more noticeable is “wyrd.” This term was undergoing a change in meaning during the time Beowulf was transcribed. In one kind of usage, “wyrd” came to mean simply “an event that has occurred” rather than a spiritual force, as in the term “gewyrth” and “weorthan.” It would be absurd, however, to say that all pre-Christian connotations had been removed, considering the era of “dual faith” in which the Anglo-Saxons still lived. We can see the original meaning of “wyrd” still implemented in Beowulf. In other words, the term appears to refer to the cosmic force that dooms or develops an individual:

(“Wyrd often skirts
An undoomed earl when his courage stands”)

Wyrd still refers to the pre-Christian decrees of those who weave an individual’s fate – the Norns.
Another term used in Beowulf refers to fate as Odinists might understand it: “metod.” Often this word is simply translated as “God” and remains severely unexamined. “Metod” appears to derive from the Old English “ge-met” and relates to the Old High German “mezan,” both meaning “to measure.” One can also see the word’s resemblance to “meter” and “metric.” Consider G. Ronald Murphy’s translation from the Saxon Heliand gospel of the ninth century:

“That never in his life will he drink cider or wine in this world: this is the way Fate made him, the Measurer marked him and the power of God [as well].” (G. Ronald Scott Murphy The Saxon Savior)

We see in Murphy’s translation from this Germanized gospel that an entity (or entities) other than the Christian god still rations out, or measures, the length of one’s life and, in turn, one’s destiny. Traces of the Norns and wyrd, therefore, still existed in the writings of Anglo-Saxons at this time.
The power of the lord also still exists during the time of Beowulf’s transcription as we know it. Words such as “waldend” and, more frequently, “drihten” refer to the Christian god in Beowulf. Yet these same terms are just as often (if not more often) used to describe a tribal lord. The meanings of terms denoting “lord,” however, involve much more than mere legal authority and wealth.

The lord in the Germanic world was a source of protection and security, but also of Luck. Tribal kings were often seen as having descended from Gods because of their immense power and ability. In the Ynglingsaga, for instance, we find that King Fjolnir is recognized as the son of Frey. Furthermore, the aforementioned Saxon Heliand gospel drastically altered the image of Jesus as meek and defeated. The Heliand author depicts him as a lord to which the twelve disciples are bound as warriors. Thus Christ follows Germanic tribal ethics as explained by Tacitus:
“When they go into battle, it is a disgrace for the chief to be surpassed in valor, a disgrace for his followers not to equal the valor of the chief. And it is an infamy and a reproach for life to have survived the chief, and returned from the field. To defend, to protect him, to ascribe one’s own brave deeds to his renown, is the height of loyalty. The chief fights for victory; his vassals fight for their chief.” (http://www.fordham.edu/halsall/source/tacitus1.html)

The church recognized the power of terms indicating lordship, for why else would they be so frequently used? The element of sacral kingship plays a part in many Anglo-Saxon works remaining in our possession. The Heliand gospel is but one example. One can look to the Dream of the Rood for further traces of sacral kingship. The spiritual nature of the lord or king is Odinic at its root. These leaders were considered by our ancestors to be born of our indigenous gods, and so words meaning “lord” also point to the original gods of our people.

The Odinic spirit in Beowulf remains, despite invasions both physical and cultural. This story has been propagandized by a foreign power, but the monks who made use of it recognized the undying faith of our people. Otherwise, they would have had no need to distort the multitude of stories, poems, riddles and charms we know of in an attempt to win over the Anglo-Saxon. The very language of the tribes who settled in England had to be repackaged in such a way that they would even begin to consider the worth of the Roman cult. Thus Beowulf stands as evidence not only of the period of “dual faith,” but also as a testament to the undying Aryan folk soul. 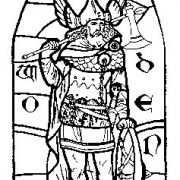