ONE of the most venerable signs of our religion, one of the most universal symbols of mankind’s spiritual aspirations, and yet one of the most passionately controversial, is undoubtedly the fylfot, more commonly known as the swastika. This emblem has been used from time immemorial in heathen temples, in Christian churches and, indeed, in Jewish synagogues. 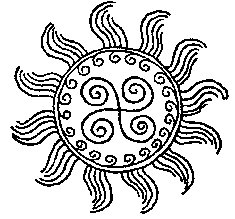 The Roman Pantheon was originally adorned throughout with a gold and blue entablature of fylfot design, part of which is preserved in the British Museum. The mosaic flooring of Canterbury cathedral incorporates the same symbol. Indeed there is hardly a nation in Europe, from Spain to Finland and from Ireland to Cyprus, which has not provided examples of its use. For the Hindus it is the holiest of signs; for the Buddhists an emblem of their Enlightened One; for the Lamaists of Tibet it is a sacred mantra and for the adherents of Cao Dai in Vietnam the particular symbol of their creed. Nor can we overlook its religious use by the native races of the entire New World, from the Aztecs to the Aleutians, and in the animistic magic of the Ashanti and other African tribes, where we must assume its origins lie in the spontaneous creation of the indigenous culture rather than in extraneous influences.

The most ancient relics of the fylfot, however, are to be found in the lands of the North, in the Swedish Hallristningar rock carvings, which date from the Bronze Age and, in our own country, in Yorkshire’s Ilkley Moor, where an unusual dotted fylfot carving dates from the same era. These ancient Northern rock carvings, which incorporate many other designs besides, were clearly of magico-religious significance and may well be regarded as the forerunners of the runes.

Just as the origins of the runes are contested, so too is it debatable whether the pre-runic fylfot has left its trace in the name and shape of the sixteenth rune of the original Common Germanic Futhark’s Sowulo. The rationalist may be tempted to explain the origin of this rune as a rectilinear adaptation of the Roman letter ‘S’ or its North Italic equivalent. Yet this leaves unexplained two uncanny coincidences: firstly, that we have what is clearly a semi-fylfot which, being the sign of the sun, impresses us with the comparison of the pre-runic symbolism; and secondly, that the phonetic value of the Roman letter, which itself has no solar connotation, allows the expression of a solar significance in the name given to the equivalent rune.

To return to the fylfot, various interpretations of its symbolic use amongst our ancestors have been put forward. For some it is the symbol of the cosmos revolving round the universal axis, Yggdrasil. For others it is equivalent to the sign of Thor’s hammer, more usually identified with thunder and lightning. The most widely accepted interpretation is that it is the sun-wheel, a variant of the so-called Celtic cross, which is an equal-armed cross within a circle, and that it thus displays the ever-revolving disc of the sun spinning in the heavens. The sun is revered because it is the guarantor of both order and life; order, because the sun’s unchanging revolutions are the surest indicator that the cosmos operates according to regular and certain principles; and life, because the sun is the source of all warmth and light, without which the world would become a barren wasteland.

The fylfot therefore symbolises everything that is good and positive and hopeful in creation, and everything that makes life worthwhile or possible. It says in times of sorrow, ‘Life mist go on’, and in times of joy, ‘Life is worth living’. The same idea is expressed in the Sanskrit word ‘swastika’, which literally means ‘well-being’ or ‘all is well’. Armed with this knowledge, we shall be more able to explain the sacred meaning of this particular feature of our religion to those who know no better. Our people are steeped in ignorance of their origins and heritage. It is not our job to blame them, but to educate and restore them to their rightful inheritance. This daunting task can only be achieved if we act with tact, discretion and sensitivity. The fylfot, like the runes, assumes a secretive nature, helpful to the wise, unhelpful to the decadent and ignorant masses.

A symbol means, after all, whatever it is understood to mean. If for the war veteran it means the enemy he fought in the last war, if for the war widow it means the cause of her loss, then that is what it means to them, regardless of what it means to Odinists. Thus to flaunt it heedlessly instead of educating our folk to understand its original and spiritual significance, will only alienate those whom we wish to win over.

Odinists must thus be warned that they are responsible for their actions to the whole Odinist community. For it is to us that belongs the task of rehabilitating and revaluating the ancient sign of the holy fylfot.

Meditations on the Black Sun - Part 1
Fylfot Hearth Galdor at White Horse Stone
Fylfot Hearth of the Odinic Rite at Yule
Holy Odinic Symbols: The Fylfot/Swastika
Sons of the Land - Men of Fylfot Hearth OR